My winter’s lease has all too short a date and once again I find myself back in Sutton Coldfield with another long summer ahead.

‘The Wine Run’, as my annual northerly migration is known, went well. By Land Rover standards the retreat from the Alps carrying wine, cheese and canned duck, was uneventful. 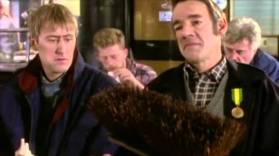 The driver’s door partially fell off while crossing a particularly vertiginous viaduct and we did leave a trail of diesel from Morzine to the Channel but, apart from that, Landie behaved herself. Mind you, I have replaced so many of her parts now (some twice) I’m thinking of renaming her ‘Trigger’s broom’.

After four months of relentless early starts, the cooking of more than 1,000 eggs and the grilling of several sliced pigs it’s nice to have a rest from my Alpine routine and not to care about whether Landie will start or not.

It’s quite nice not to have to ski too! Now, with seven whole months of summer ahead and while I look for gainful employment, I have time to complete the second book. But what is there left to write about?

I may have left the reader thinking, demons vanquished, new love blossoming, that I lived happily ever after. But life’s not like that – well at least mine isn’t.

With two more seasons under my skis since the ‘Skiing With Demons’ narrative ended (Season 4) I have accumulated more anecdotes, met more interesting people and heard more chairlift philosophy worthy of documenting. Then there is the stuff I left out!

Like an annoying itch that won’t go away, I feel the need to scratch mine some more and to fill in some of the blanks and recall some of the stuff I’d forgotten about. The truth is the book never really got finished – to my satisfaction anyway – it just got published.

Season 5, had its moments, but Season 6 marked a change in direction for the Chalet Project. It moved to a new base, a converted farmhouse called Chalet Framboise, higher up the hill, further out of town and a long way from the Buddha Bar. Its remote idyllic location proved a more authentic Alpine experience and gave me a lot of practise putting snow chains on.

Framboise came with a black cat, a local stray that adopted the place. I suspect Le Chat Noir, as I named her, caused an outrageous amount of bad luck, which at least helped generate material for the new book.

Season 6 also saw another transition – less drinking, by me at least, and most of the Project’s supporters got with the new programme of eating in and skiing without hangovers – apart from a few die-hard cougars and boys’ trips that is. ‘But that’s going to make for a very boring book,’ I hear you say.

But you’d be wrong. As a slightly more sober observer more fun can be witnessed without the morning regret and a damn sight more can be remembered! If you’re not convinced, luckily the book will also cover Season 5, based in the old chalet (Chalet Neige), in a kind of ‘The Last Days of Rome’ type way.

The Après Aliens may take a back seat, but the Ski Demons will resurface. They were never really vanquished, they were just waiting for some low psychological ebb before they chirped up to tell me I’m going to die. I’ve also had others tell me about their own battles with ski demons and discovered my true calling – skiing psychiatrist, not skiing instructor.

Season 6 involved some Extreme Girlfriend Skiing too and now the jacket fits and I’m officially a sexist, I might as well wear it and elaborate some more – albeit in jest.

The season also saw me wear my coveted Blue Ski Club of Great Britain jacket in anger (the one that caused me all the problems getting) and play Jack Nicolson in my own ‘One Flew Over The Cuckoo’s Nest’ parody. I also started a feud with the ESF, but that was more about parking than ski-hosting.

Notably absent from Season 5 & 6 were children. Mostly because, for the safety of everyone concerned, I skipped Morzine for the school half term weeks and most parents who presumably had read the book decided to go elsewhere.

But the new book, like the old one, will be mostly about a meta-crisis – a midlife crisis for want of a better description. Skiing will be the context, the Alps the backdrop, but not the story.

It took me three years to write ‘Skiing With Demons’, I’m hoping (with less personal angst to deal with and fewer people to upset) to complete the new book in seven months.

So, I hope you’re up for some more snowy cathartic self-indulgence and will buy it when it’s finished – I’ve got a labrador to feed and all that. If so, by way of encouragement, send me an email, ‘like’ my page or friend me on Facebook and I’ll let you know when it’s out.

Now back to it.